Humans? We Are A Race Of Aborted Giant Fetuses.

We are quite literally a race of giant aborted fetuses prematurely ejected from the womb of our ancestral symbiotic host after tens of millions of years of increasing fetalisation and biological integration.

We have and continue to endure a slow-motion miscarriage resulting in multiple system failures including the developmental malformation, atrophication and erosion of our embryonic new brain.
We are now in the latter stages of reverting to our primitive mammalian origins, increasingly hierarchical and aggressive with rapidly reducing perceptual and cognitive capacity.
We also have an unusual form of senile dementia that includes severe delusion and almost no capacity to fully recognise our catastrophic predicament despite a mountain of corroborating evidence.

Our ancestral mythological history with a common theme of massive perceptual trauma, the complex of traditional ancestral treatments focused on perceptual restoration and our rapidly accelerating descent into self-harming delusion can all be explained by the existing scientific evidence.

The evidence tells us we co-evolved for millions of years while plugged into our symbiotic host's reproductive system and a massive and new kind of brain was grown for us. When we lost our symbiotic host we were suddenly disconnected from our host's reproductive system and our delicate fetal form and fragile embryonic new brain were exposed to a hostile and rapidly ageing environment.

The developmental trajectory of a typical mammal starts with conception or embryogenesis and implanting of the embryo into the mammalian uterus. The developing mammal is often described as a parasite, completely helpless and utterly dependent on its maternal host for all its biological needs. During its gestation, it gradually matures and slowly develops its own survival systems, by the time it is born it is close to being independent aside from requiring feeding by its host until it can feed itself.
Humans currently follow this trajectory but much more slowly than is typical for mammals and we are still very undeveloped and uniquely dependent on our maternal host at the time of our birth. We are often described as having a post-natal fetal development phase where we are as helpless and dependent as most species are prior to birth, unusually we also retain fetal and juvenile traits into adulthood.

Our evolutionary origins were the complete opposite of the usual mammalian developmental trajectory of a parasitic embryo slowly maturing into an independent mammal.
Our bizarre origins involved a typical mature mammal being re-implanted into a reproductive system and slowly turned back into an increasingly integrated and dependent fetus-like organism. 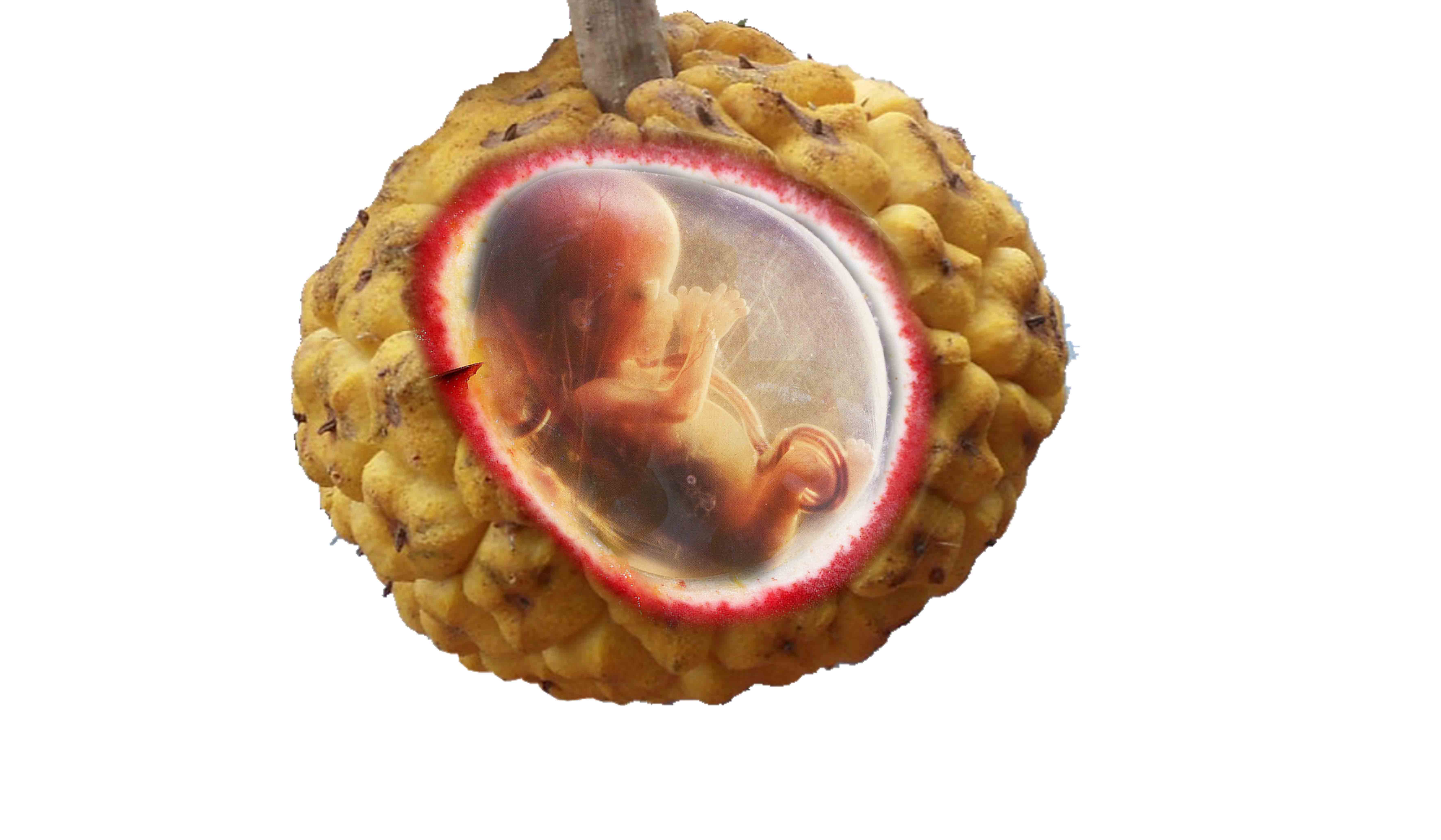 At a simple symbiotic level, we were gradually transformed into a mobile sexual appendage of the flowering plants reproductive system.
Our job was to disseminate embryonic plants (seeds) and in return, we were provided with regular shots of juvenilising reproductive biochemistry via the ingestion of swollen ovaries.

Over time our fetalising symbiotic relationship also greatly amplified and extended our neural proliferation window and grew us a huge new brain with a radically different kind of neural architecture providing rare and greatly enhanced perceptual ability.
While this remarkable relationship can be described in purely biological terms of symbiosis and the emergence of hybrid neural structure it can equally be seen as the creation of an extraordinary hybrid reproductive system, part mammal and part plant that was sufficiently complex for the genesis of a high-resolution perceptual lens.

If you separate the objective scientific data relating to human origins from its currently flawed and quite surreal interpretations you can start arranging the jigsaw pieces to describe our origins in such a way that easily and coherently explains our ancestral traditions and our descent into self-harming insanity.

This is perhaps the most simplistic account that tells the whole story in a way that conveys the emotive seriousness and urgency of our circumstances.

The human race is the aborted legacy of an extremely rare symbiotic hybrid.
A basic typical mammal was lured by and plugged into the angiosperms reproductive system.
The result was a heavily modified mammal, fetalised, slowly stretched and augmented with a giant new embryonic brain.

We spent tens of millions of years plugged into our symbiotic host’s reproductive system and it held us in a state of perpetual gestation. The juvenilising hormone regime slowly transformed us into a fetalised mammalian form by gradually inhibiting our normal maturation mechanisms. The same process grew us a huge new kind of brain by greatly amplifying and extending our mammalian neural proliferation window. We ended up with a colossal neo-cortex composed of embryonic neural tissue; this endowed us with an extremely high resolution perceptual lens and a raft of unusual behavioural traits.

Being plugged into our host's reproductive system and slowly fetalised we became increasingly biologically integrated and dependent on our host for all our needs. Most particularly the emergence, growth, structural integrity and functionality of our very fragile embryonic new brain was completely and utterly dependent on remaining implanted in our host's reproductive system.

The longer we were held in a state of permanent gestation the more biologically integrated and dependent we became, exactly the opposite trajectory of typical mammalian development.

Think of symbiotic reproduction in anglerfish where the male is literally subsumed into the female and new hybrid or symbiotic tissue and a circulation system fuses them together and provides the male with all of its requirements.

In our case a new hormone and biochemical system was provided by the plant hosts reproductive system that transformed us into a fetalised form, grew and fuelled our hybrid new brain as well as providing all our basic needs.

Whenever these kinds of fragile symbiotic relationships breakdown, which they frequently did, it is every bit as traumatic and damaging as any kind of miscarriage or abortion as that is exactly what happened.

When a deeply integrated, highly dependent and sensitive fetus is suddenly torn apart from its maternal host there is the initial trauma followed by a struggle to survive as essential support systems slowly fail.

In our case, we have survived while enduring what is really an ongoing slow-motion miscarriage.
The transient elements our hybrid nature are reverting and our once embryonic new brain rapidly overly matures, atrophies and erodes away.

The immediate impact of the miscarriage on our perceptual equipment was catastrophic, our host provided an extremely rich cocktail of neuro-active and neuroprotective compounds as part of its reproductive biochemistry. Our new brain evolved to run on a high octane rocket fuel mix of basic mammalian neuro-chemicals combined with a much richer mix of neuro-active plant compounds and simple sugar molecules. The loss of our symbiotic neuro-chemical operating system left us chronically deficient in the complex neurochemistry our new brain emerged in and evolved to run on.
The miscarriage also left our huge and delicate new brain without the neuroprotective compounds it required against oxidisation and inflammation, relative to our symbiotic history we have a perceptual system that is heavily oxidised and inflamed.

Most importantly of all the juvenilising hormone regime required for neural proliferation and maintaining the structural and functional integrity of our unique perceptual lens was lost.

Although the embryonic new brain ran its own juvenilising regime, without being plugged into the hosts womb it slowly starts to mature and in time it accelerates its own maturation or ageing with each generation.

You can think of our new brain tissue in the same way you might think of mammalian placenta, the placenta grows rather like the symbiotic anglerfish  tissue, as a new symbiotic or hybrid structure to support the fetus.
In the case of our new brain, it not only provided us with a massive perceptual upgrade it also ran an increasingly juvenile endocrine system as it expanded and became more juvenile. Being plugged into our hosts reproductive system created a more juvenile neuro-endocrine system that fuelled its own neural proliferation by incrementally adding to the juvenile impact of our host with each generation.
Basically being plugged into our host's reproductive system initiates a juvenilising feedback loop.

Think of a newborn baby with its placenta still attached, the placenta continues to pulse and provide essentials for the fetus for up to 30 minutes.

Following our symbiotic miscarriage, our neo-cortex has inevitably suffered a huge loss of its unique perceptual function,  it has however continued to provide us with a hormone regime more juvenile than that of a typical mammal. Unfortunately like the fading placental pulse that juvenilising process has been cycling back with each generation and slowly increasing our exposure to our own ancient and primitive mammalian hormones with disastrous consequences.

So no mystery at all why we so are so utterly physiologically weird with an ancestral mythology of divinity that has slowly spiralled into self-loathing, self-harming and industrial-scale self-destruction.

We evolved while plugged in to and increasingly integrated with the plant's reproductive system or womb equivalent for tens of millions years.
The juvenilising environment slowly turned us into stretched and ultimately taller 'fetuses' with a colossal and powerful neural expansion endowing our basic mammalian brain with a very high-resolution perceptual lens.
Then catastrophe, symbiotic breakdown and sudden separation, literally torn apart from our biochemically integrated host or womb, we are at the wrong end of a profoundly traumatic slow-motion miscarriage.
Still struggling for life but sliding into symptoms of delusion, insanity and finally, violent self-destructive death throws, unless we take immediate action the last vestiges of our divine hybrid self will die and be lost forever.

Unfortunately, our perceptual symptoms are now so severe we fail to see the reality of how far we have already fallen into near unrecoverable delusion and madness despite overwhelming evidence (exactly as the relevant academic data predicts)

As our reversion process accelerates the leading edge of our neurological and perceptual atrophication, our more rapidly ageing, increasingly senile, frightened, primitive and aggressive left hemisphere begins to take perceptual control.
Its influence is greatly amplified as its desire for control in those more afflicted with post symbiotic senility results in a societal structure disproportionately shaped and stratified by humanity's most dysfunctional minority.

This rough pictorial outline dating to 1998 can be used to help visualise the process.

The second image equates to our mammalian ancestor being implanted into the flowering plant's reproductive system.
The third image equates to the result of millions of years of co-evolution in the flowering plant's reproductive system that heavily fetalised our mammalian physiology and grew us a massive new kind of perceptual lens via an exponential juvenilising feedback loop.
The fourth image equates to the breakdown of our symbiotic relationship and the beginning of the reversion process or more bluntly the miscarriage of our now deeply fetalised and highly dependent hybrid ancestor.
The subsequent images allude to the acceleration of the reversion process or maturational feedback loop that has rapidly aged our embryonic new brain and caused a massive failure in our perceptual capacity.


NB The timeline dates are not rigid, this was likely a dynamic and fragile process resulting in many failures in many symbiotic lineages at all stages of fetalisation and neural proliferation. Very few symbiotic relationships were stable for long enough to result in the kind of perceptual lens our hybrid ancestors acquired before typically failing. 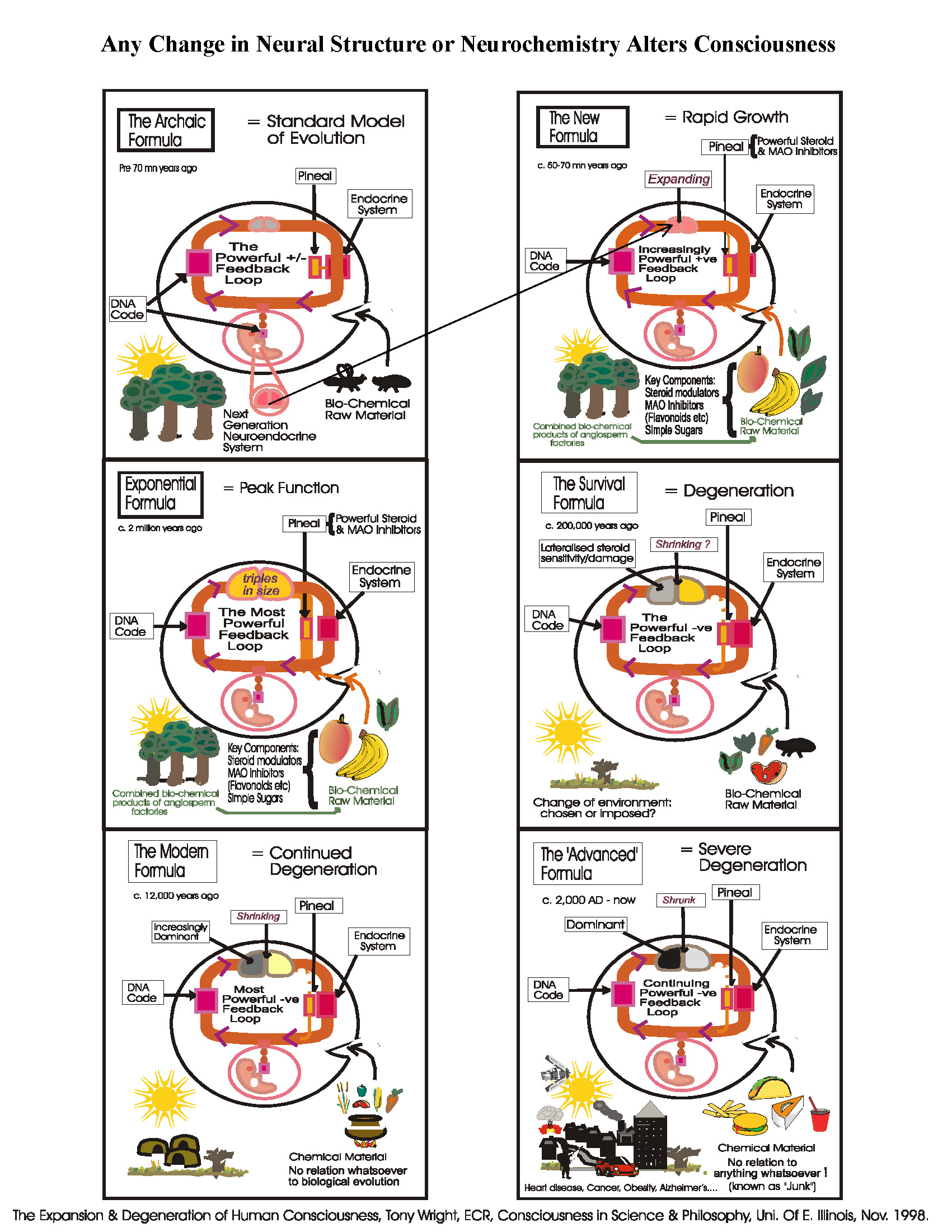